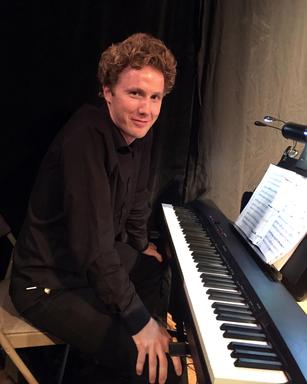 Jonathan Fadner's music for theatre has been performed at colleges, and theater's in California, and New York. His songs have been featured by 54 Below, NYMF, Barrington Stage, MSTDA, Don't Tell Mamma's, Sardi's, The Duplex, and more. His shows have been produced by National Asian Artists Project, Common Man Musicals, Mr. Finn's Cabaret at Barrington Stage Company, and by Main Street Theatre and Dance Alliance. His full-length musical The Unspeakable Act with (Book by Steven Hess) lyrics(Steven Hess and Jonathan Fadner) and music by Jonathan Fadner won best of Fringe in the San Francisco Fringe Festival.  Jonathan's commission from Main Street Theater and Dance alliance “The Monkey King” which he wrote with his wife Kimbirdlee Fadner, has been performed at the Queens Theatre in the Park(directed by Steven Eng), The Actor's Temple in NYC, Flushing Library, on Roosevelt Island, and as part of Queen's Theatre's online content.  As a Junior version the Monkey King has been performed multiple times in NY and California. Jonathan's new musical The Ghosts All Around You, which was commissioned by MSTDA, is now an annual tradition and was funded by the New York State Council on the Arts and the NYC Department of Cultural Affairs. Jonathan also works in New York as a teacher who specializes in creating new musical theater pieces with youth.